This is Scientific American's 60-second Science, I'm Annie Sneed.
The Arctic's permafrost is melting—and fast. That's bad news, because these frozen soils store billions of tons of carbon, just waiting to be unleashed. So is there a way to save the permafrost? One team of researchers thinks it may have found a possible solution: big animals, herbivores—animals that eat only plants.
Back in 1996 researchers started an experiment called Pleistocene Park. They fenced in about eight square miles of land in northeast Siberia. And then they introduced different types of herbivores: reindeer, horses, moose, bison, sheep and other large critters.
Since then, scientists have studied these animals' effects on the ecosystem. One outcome is that these large herbivores help keep the ground very cold—cooler than it would otherwise be.
"The snow in winter is important for soil temperature, because it acts as an insulating layer. So the air in winter, at the high latitudes, is much colder than the soil."
Philipp Porada, a vegetation ecologist at the University of Hamburg. 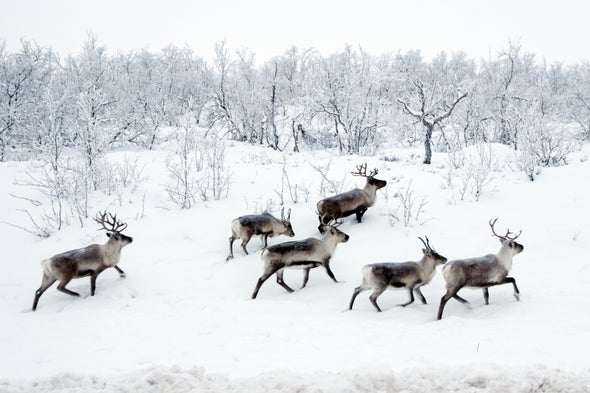 "So the idea of this experiment was to introduce large herbivores—and to quantify their effects on soil temperature to see if they can actually protect permafrost soils against thawing. And this works because the animals' trampling, and this leads to less insulation of the soil against cold air temperatures and results in a cooling effect."
Freezing air reaches the soil more easily. Porada and his colleagues realized the significance of this effect, so they pulled data from Pleistocene Park, as well as from Sweden, to model what effect herbivores could have on permafrost if they lived in large numbers in the Arctic. The researchers found that even in a worst-case scenario, some four degrees Celsius of global warming:
"These herbivores in the model reduce soil temperature substantially, by 1.7 degrees on average. And this leads to a preservation of around 80 percent of the original—today's permafrost area. And without the herbivore effect in the model—so in the control run—we found that only 50 percent of the permafrost area would remain by the year 2100. So we can say that the effect of the herbivores in the model leads to a substantial preservation of permafrost soil."
The study is in the journal Scientific Reports.
It may seem strange to have herds of horses and cold-adapted sheep grazing the Arctic tundra. But then again, we're living in strange times.
Thanks for listening for Scientific American — 60-Second Science. I'm Annie Sneed.